A Niqab and a Panama hat


This week I was in Germany for a couple of days, in a city very familiar to me. I was doing some works, describing a collection for an auction house, but in my lunch breaks and evenings, I did my usual things. I like to stroll, taking in the people. In a pedestrianised shopping area, a woman appeared out of the crowd coming towards me: tall, slender and dressed in an immaculately well-cut and seemingly brand new niqab, the first I had seen on this visit. When I see a niqab, my habit is to look at the male who will be walking alongside and, yes, there he was: considerably shorter, hunched a bit over his smartphone, dressed according to the regulations: a bit of stubble, tee-shirt, jeans, and trainers. My rapid visual profiling didn’t manage to take in the logo on the trainers so I don’t know what brand he favoured.

It’s very decent of Prophet to permit young men to dress in ways which are practical for life in any European city. It means they can run after a bus, vault a barrier to cross a road. They can pick up children with ease, put them on their shoulders and, perhaps most importantly, kick a ball around.

I just wish the Prophet had been a bit more permissive about female dress. The niqab can look very stylish; so too can high heels. But both are impractical. I guess the niqab can be very hot inside on a climate warming summer day. More importantly, it is isolating. I will come to that.

I glance back at the woman. She is staring at me, intensely, her eyes a perfect study in black and white, because those eyes are beautifully picked out with expertly applied kohl.

But I can’t decode the look as angry or friendly or just inquisitive - there is no mouth gesture to help out. I’m stumped to understand why I should be worth a very frank stare. The stare is made possible, I guess, by the fact that I’m wearing dark glasses (cataracts) and so, from her point of view, there is no eye contact.

Then, as we pass each other, a penny drops and I laugh. I’m old and male and pale and I’m wearing a Panama hat, a proper one with a broad black band. Hitherto, I have understood the Panama as standard issue for bald-headed elderly gentlemen on sunny days. But I realise that on my stroll today I haven’t actually seen another Panama - I would notice. Maybe a Panama is not a German thing, even for elderly bald heads. Perhaps it’s like this: she is my first niqab of the day and I am her first Panama. I think it's the hat which caused the stare.

People do sometimes call out to me when I’m wearing a hat. Later, in the central park, a young woman on a bench making out with a boyfriend called after me  Bonjour though I was too slow to turn, lift my hat, and reply - as I should have done - Bonjour, Mam’selle. Anyway, it shows that there’s at least one other person in this city who reckons a Panama a notable and, indeed, a French thing.

That brings me to me to the point I skipped over. We are often led to believe that in modern urban environments, people walk around as if no one else exists, isolated monads who don’t interact. That is false. A lot goes on, an awful lot. I give one example relevant to what I want to say.

If in the street I see a child behaving in a way which is charming or delightful or just funny, I will almost certainly smile at whichever person is doing the parenting. I think that is the norm rather than an eccentricity. It is also the case that the parent will acknowledge the compliment about the child which the smile implies - they will smile back. Some who are more bold will end up exchanging a few words, not quite “passing the time of day” but about things specific to the child, like the child’s age or name. If I smile at a parent who happens to be wearing a hijab, as I do, she will also smile back.

When women wearing the hijab began to appear at shop tills in London and then where I live, I acted in a correct but very restrained manner, as if attending a vicarage tea party. I didn’t engage because I imagined that it might be unwelcome. Now I will pass the time of day, sometimes crack a joke, encouraged by the fact that there is usually a smile on offer and even a joke.  I conclude that it’s quite a good idea for  old white males in panama hats to behave as if they might be  ordinary human beings.

The woman in the niqab is pretty much excluded from this small change of everyday life. It really makes a very big difference that you can’t see a face and from the face gauge whether a compliment or a joke would be appreciated or has gone down well. Leave aside that the man in tee-shirt, jeans and trainers might not approve. Leave aside that she is not going to initiate any exchange anyway. The face covering inhibits any exchange. I suppose that is its purpose.

The exclusion is not total: if there are women wearing hijab on the streets, they do engage with women wearing the niqab and vice versa. (I’ve been watching this on my strolls elsewhere). Perhaps the best hope for the future is that the women who wear headscarves enable the women fully covered to change their style, at least for everyday street life. Maybe the niqab would then become something reserved for special days, a reminder of the past, like the traditional dress that jeans and trainers males put on for formal occasions. It would cease to be a burdensome obligation of everyday life.

In the same way, though I can't understand why anyone would want to wear impractical high heels for shopping or work - and most certainly should not be obliged to do so - I can understand why someone might want to wear them for special occasions, even if they often end up being kicked off and abandoned.

In that same  lunch break stroll, a group of teenagers wearing hijab passed me. One has combined her hijab with bright yellow stiletto heels. It would seem that Germany is not equipped with the necessary police to promote virtue and suppress vice. 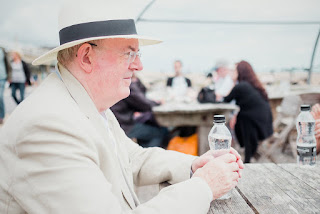