Number Ten Downing Street is now the home of Tsar Boris and his Tsarina, Carrie; in the corridors there lurks Rasputin, Mr Dominic Cummings,  currrently advertising for weirdos (his word) to assist him in running the country and keeping the Tsar's children out of the newspapers. His job description explicitly rules out anyone who can talk about Lacan over dinner, otherwise I might have applied. But at least I can dust down this previously-unpublished piece of memoir. We are all opportunists now.


*
An “O” level in French dated 1962 and no subsequent study of the language would hardly equip me for graduate studies in Paris ten years’ later and so, after being awarded a Leverhulme European studentship, I spent the summer of 1971 attending full-time at the Alliance Française on the Boulevard Raspail. The teaching methods were traditional and effective but I was hardly fluent by the end, either as speaker or writer.

Nonetheless, I composed a letter to Jacques Lacan. It was handwritten and I don’t have a copy, though I recall writing about my interest in Althussser, oblivious of Lacan’s own connections. I had already bought a collection of Lacan’s writings and had heard of his seminar. But I understood “seminar” in the English sense as something which at most twenty people might attend, so I wrote seeking permission to be one of them.

In reply, I got a hand-written letter giving me the details of the seminar which would re-commence on the 8th December in Amphitheatre II of the old Law faculty in the Place du Panthéon. In addition, he was to give a one-off lecture in the chapel of Saint Anne on 4th December at 21 heures 15 - arrive early, he added, because it will be crowded. Finally, should I wish to meet, he had alerted his secretary - the letter gave a telephone number. 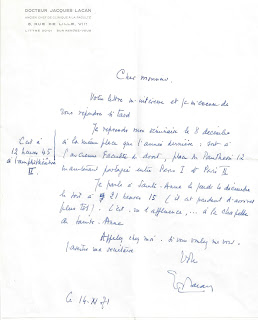 I made my way to Saint Anne for the crowded lecture and subsequently to the first, equally crowded “seminar”. There were hundreds of us. A little late, Lacan entered stage left in full-length fur coat, behind him a young woman who assisted with the coat, draped it over her arm, and left. I was sitting next to Ann Smock (later, Professor of French at Berkeley) and I think it was she who pointed to the front row of the lecture theatre which was populated by stylishly and indeed flamboyantly dressed young women. It’s said that they are paid to sit there.

I duly noted that fact and on my way to the second lecture the following week paused to buy two buttonhole flowers. I sat next to Ann Smock again and presented her with an orchid to match my own. We should join in the spirit of the thing, I said.

*
I never responded to the invitation to meet Lacan, perhaps because  shortly after I met someone who had just had a bruising encounter with him. Lacan’s first English translator, Anthony Wilden, was in Paris to give a few seminars (which I must have attended). In conversation afterwards, he said that he had now written a book on Lacan’s work and had sent the typescript to him for comment. Wilden was hoping for Lacan’s imprimatur in the form of a Preface, something which Lacan had recently provided for Anika-Rifflet Lemaire’s Jacques Lacan (1970).

Lacan summonsed him and sat behind his desk with the typescript laid in front of him. He flicked through and Wilden could see that certain words were underlined. Lacan gestured at the typescript and said, My name does not appear often enough.

*
My own feeling now is that Lacan's early work is still worth reading, notably the Rome discourse which Wilden translated as The Language of the Self . It is sensible to read his work alongside Melanie Klein and Donald Winnicott rather than as something which stands alone and apart. For example, Lacan's contrast between parole pleine and parole vide parallels Winnicott's True Self and False Self.

But as the work becomes more obscure and convoluted, I think it eventually becomes uninteresting except as the symptom of Lacan's desire for some kind of cult status - a status he clearly achieved. Along the way, he also made a lot of money.

Rather in the same way, I came to distrust Derrida's work and gave up on his lectures. (I tried again at a later date but gave up again). But I never developed the same distrust towards Barthes, Foucault or Levi-Strauss. I had chance to listen to  them during my time in Paris and felt that in their different ways they were all perfectly serious and not seduced by their own fame.

I attended Lacan's public lectures and read the Ecrits when I was in Paris. I also had chance to discuss Lacan's work with Elisabeth [Sanda] Geblesco. Later (1974 - 81) she became one of the last analysts to be supervised by Lacan. She died in 2002 and in 2008 her notebooks recording her meetings with Lacan were published as Un Amour de Transfert.  See now my review

Posted by Trevor Pateman at 01:55 No comments: