Redsell: An Old Crayford Family all over St Paulinus churchyard


It makes life a bit easier to have a relatively uncommon name in a family tree. The 1891 census for England and Wales recorded only 123 Redsells and 102 of them were in Kent and probably all related one way or another. They didn’t exactly go forth and multiply; the name remains uncommon.

My mother’s father was Thomas Redsell Stevens (1861 - 1925), his mother’s maiden name dropped into the middle of his. My mother said her father had a bad temper and that he got it from his mother and she got it from being Irish. There is no evidence of Irishness that I have yet uncovered, but she may well have had a temper - and she was certainly economical with the truth.

Emma Redsell (1826 - date of death unknown) was baptised in the parish church of St. Paulinus, Crayford in 1829 and married Charles Stevens in the same church on Christmas Day 1847. She had actually been born in Camberwell, Surrey four months’ after her own parents married there in 1826 , but her father Thomas Redsell had been baptised in Crayford in 1803, again in St Paulinus. He married in his wife’s place of residence and probably stayed there until their child was born. His wife Agnes Bennett (1804 - 1860) was buried in St Paulinus churchyard; she lived to see Emma married.

Emma’s son Thomas, my grandfather, ran away to sea in 1875. Emma ran away from her husband Charles sometime in the 1870s, taking their two youngest children. She set up home some miles away in Plumstead with a much younger man and appears to have knocked twenty years off her age in order to get closer to that of her partner. In the census of 1871 living with her husband, they are both 44. Ten years later in the census of 1881, living with her 29 year old partner Emma is 34;  ten years later again this has been adjusted up to 53, though her actual age then was 64. She appears to have no children with the new man, as one might expect from her real age at the time of leaving her husband. By 1891, the year her son Thomas marries, she is living alone with her Plumstead partner. Whether she attended her son’s marriage, I do not know (The bride's father was a witness, but the other witness was "Ida Gardiner" whose relationship I have yet to establish). Charles her husband died in 1887 so he didn't attend.

It may be that the real temper problem was not with Emma but with this husband Charles. Emma’s parents seem to have been a stable enough couple. Her father Thomas Redsell was a cowkeeper, what we would now call a dairyman: someone who kept cows and sold milk, no doubt locally in Crayford. She was the first child, but there were six more ending with twin girls born in 1844 both of whom ended up making good enough marriages for their late husbands’ Wills to go to probate, one twin collecting from two husbands.

Though Emma’s mother Agnes died in 1860, her father Thomas continued to live locally with two daughters still at home in 1871 and still describing himself as a cowkeeper.. He dies at the cusp of 1876 aged 71 and is buried in St Paulinus churchyard. So he lived long enough to see his grandson Thomas Redsell Stevens run away to sea and maybe to see his daughter Emma leave her husband for a much younger man.

Thomas the cowkeeper’s own father John Redsell died in 1854. In the 1851 census he was a 69 year old master cordwainer - a shoemaker - with two apprentices. He was living in Crayford with three children still unmarried in their thirties, though there is also a grand daughter who may well be the child of one of the unmarrieds. His wife had died long before, in 1835 at the age of 54. She had been Elizabeth Finch and he married her in 1802 in St George, Hanover Square, Westminster. But John their son had been born and baptised in Crayford (St Paulinus again) in 1782 and he lived in Crayford all his life, always working as a long-lived shoemaker (1782 - 1854).

The same is true for his father,Thomas Redsell, baptised in 1749 and marrying Elizabeth Cranwell in 1780. This Thomas - my great great great great (4G) grandfather - was also a shoemaker and a prosperous one, taking on apprentices in the 1780s and 1790s. He and his wife were both buried in St Paulinus: he in 1813 she in 1834.

The repetition of names continues back to the final stage I have been able to chart with the help of Gillian Cable: when 4G Thomas Redsell was baptised in 1749, apparently in nearby Dartford rather than Crayford, his parents were 5G Thomas Redsell and Elizabeth, maiden name unknown.

The Redsell in me comes from a family local to Crayford and its environs; it remains to research those they married: a Bennett, a Finch, a Cranwell. 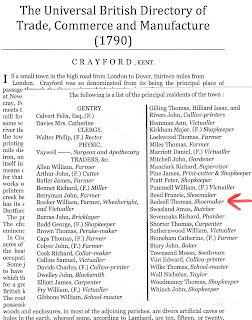