Turner: Millwrights in Westmoreland, Buckinghamshire, and Kent - and Emma Budd of Hillingdon

If there is a Victorian paterfamilias in my ancestry it must surely be my great grandfather John Turner. He was a brute who killed two wives and several children. That is one way of reading what the archives tell us about his life. But just to balance things up, his first wife Emma Budd left her own baleful legacy which continued into my mother’s mother, my mother and me.

Let’s look at the basic facts.

John Turner re-marries on 10 December 1885 to Agnes Mason who is twenty years his junior - he 54 she 35. On 14 August 1886 and therefore the probable result of a wedding night pregnancy, John Turner becomes father to

John Turner did not marry a third time, but his unmarried dead wife’s sister who was already living with them stayed on to care for the four surviving children of his second marriage. Eliza from his first marriage - my grandmother - had already moved out of the house and gone to live locally with her older sister Ellen and her family. Eliza went to work and in the 1891 census is a 24 year old paper mill worker.  John Turner died in 1904, aged 74.

John Turner was a very skilled artisan, a millwright specialising in maintaining the wheels of water-powered flour mills and paper mills. In this he followed his very successful father, about whom more in due course.

It was through his work that John Turner no doubt met Emma Budd. He had been born in 1831 in Wycombe or Wycombe Marsh, Buckinghamshire - now we tend to speak of High Wycombe - and by  1851 had moved out of his father’s home to live with his older brother’s family ( that’s what the census says), but around that time he also went to work in Hillingdon - think Uxbridge, Middlesex - a short distance east. Hillingdon was home to a dozen flour mills and John must have worked on at least one of them.

Since Emma Budd was the daughter of a flour miller, George Budd, it was no doubt through his work that they met and after marrying her he took her back to Chepping Wycombe where he is established in the census of 1861 with his wife and three living children. Whether John had gone up a bit in the world by marrying George Budd’s daughter or she had gone down a bit, I am not sure - I would need to know more about George Budd of Hillingdon.

Between 1854 and 1861 Emma lost four children in infancy, dramatic even by the standards of the time. I think she fell into depression and more precisely into a melancholy which then infused a religious faith - whether already existing or not, I do not know - of a stern and threatening character. She heaped blame on herself for the death of those four children and she felt she deserved to suffer.

It so happens that Emma Budd is the first of my ancestors who has left any written trace now in my possession. In 1882, a year before her death, she inscribed a British and Foreign Bible Society New Testament to her fourteen year old son Godfrey and this is what she wrote: 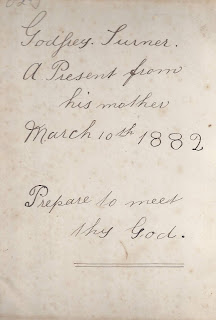 But it may be that Emma Budd was also preparing herself for her own death the following year. She may have been ill and known it. I have a photograph on cracked glass which I think may be of her - the facial look is that of her daughter, my grandmother Eliza shown underneath from a 1919 wedding photograph in which she would have been the same age as her mother at death. 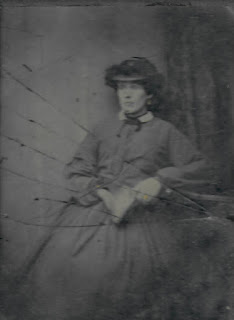 My grandmother Eliza remained faithful to her mother’s memory and, like her, strongly believed in punishment for wickedness; she may have disapproved of her father’s second marriage, though he signed as a witness at her marriage in 1892. But as part of her fidelity, Eliza Turner also married her own brute, my grandfather Thomas Redsell Stevens with whom she had seven children who survived and one (according to my mother - but there is no record anywhere) which did not. My mother was probably correct: she would remember the fact not least because she had a miscarriage and a stillbirth before I was born and blamed herself for both. Her melancholy was extreme and she spent four long periods during her life in mental hospitals, preparing to meet a very punitive God.
*
John Turner’s energy and ambition had taken him out of Wycombe to Hillingdon. Later, it took him to Kent. In 1871 he and his wife are installed with their six living children at “Hawley, Sutton at Hone, Dartford, Kent”. That complicated address uses the names of three localities strung out along the fairly short River Darenth as it flows south to north into the Thames through the chalk downlands of Kent. The Wikipedia entry for the River Darent - that is apparently the modern spelling but I always use Darenth - lists no less than 29 water mills of one kind or another which once lined its banks.

Half a dozen are familiar to me as places where members of my mother’s family and my mother herself worked, usually as mill hands, one as a papermaker, and in John Turner’s case, as a millwright. Once he has moved to the Darenth valley, John Turner stays there - in 1881 he is living in Sutton at Hone, the same in 1891, and in 1901 in “Darenth (St Margaret’s Parish) Dartford". His children work in the paper mills and it would continue that way for another generation: my mother became a mill girl when she left school at thirteen or fourteen in 1921. The mill was just down the road from the Shirehall Road where she lived with her mother Eliza Turner and father Thomas Redsell Stevens.
*
John Turner’s millwright father probably set his son a high threshold for achievement. Richard Turner, my great great grandfather, was born in 1798 in Westmoreland but it seems that there were southern connections already existing and Richard marries in West Wycombe, Buckinghamshire, in 1818. His wife is Sarah Hall born in 1798 in Winchcombe, Gloucestershire. (Winchcombe was notable for paper making, the Postlip Mills  best-known, so it's likely that they met in some connection with Richard's work). Both of them end their lives in Wycombe, Richard in 1861 and Sarah in 1878.

But in between, Richard’s work takes him away from Wycombe and most notably also to the Darenth valley. The census of 1851 has him in Sundridge, a village near Sevenoaks, where he is living with his wife, four children, a grand daughter aged 3 with no attributed parent, a visitor, three servants, and an unclassified paper maker. All eight adults have the word “paper” in their characterisations (two of the servants are paper maker’s daughters), and Richard heads up the household described as a foreman in paper factory, aged 53.

This is clearly some household, and in Sundridge there was only one paper mill. But it was no ordinary mill and in consequence Richard Turner no ordinary foreman. The internet tells me that the mill produced paper for the Bank of England.

But Richard Turner returned to Wycombe sometime before the 1861 census, perhaps because he was in poor health. In that  census his Wycombe household contains only himself, his wife and two unmarried sons. Richard is working as a dairyman.