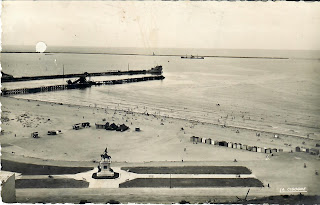 I was born and grew up in that part of north west Kent now disappeared into south east London, most obviously as London’s Thamesmead which overlays what were once separately named marshes along the south banks of the Thames. On old maps they are blank spaces overwritten with Plumstead Marshes and Erith Marshes; I guess that the new development was not designated Thamesmarsh because suburban planners prefer to evoke the quaint.

The people most familiar with the old marshes were the large population of gypsies who, once the Kentish fruit and hop picking seasons were over, settled there for the winter and turned to hawking and scrap collecting to tide them over until spring. Rag ‘n’ Bone! Rag ‘n’ Bone! cried the man atop the cart pulled by some skin and bone old nag. It was a way of life largely destroyed by the great North Sea flood of January 1953 which swept away the gypsy homes and forced most into modern housing.

The gypsies had a champion in a local Labour MP, Norman Dodds, whose autograph I collected at a fete to celebrate the Coronation of Elizabeth the Second in the summer of 1953. Earlier in the year, the new Queen had visited evacuees in Erith, the borough’s streets crowded with people hoping to catch a glimpse; I was one of the hopefuls. The centre of Erith, with its modest set of jetties and wharves, abutted the river and separated the western marshes from the eastern Dartford Marshes, also blank on maps except for the isolation hospital at Long Reach, built directly onto the riverside and thus enabled to receive smallpox patients brought down by barge from London. The hospital was spoken of in my childhood as if some haunted house not to be approached.

Dartford itself was my birthplace and until the age of eighteen I lived there and in neighbouring Crayford, Slade Green, and Lower Belvedere. The last had a fine view across the river towards the Ford of Dagenham, at the time the largest neon sign in Europe. The river was busy with ships destined for London’s docklands, but small ports downriver still handled cargo. Ford had its own deep water dock and a short railway to handle the coal for its power station and steel for its foundry which arrived by ship. Its neon sign faced directly onto the river. But despite the Clean Air Act of 1956, thick fogs on the Thames were still common, the booming of foghorns background noise in the everyday life of those who lived along its equally shrouded banks, the giant neon light often no more than a blur.

London was easily accessible by train for a day trip, though the journey was not particularly pleasant. Trains were worn out, and the great metropolitan terminus of Charing Cross had lost whatever past glamour it may have possessed. Travel in the opposite direction was reserved for summer holidays. If you lived in the arc of north west Kent, then the holiday destination of choice (if choice there was) would be one of the resorts scattered along the east Kent coast, starting at Herne Bay and proceeding clockwise through Margate, Broadstairs, Ramsgate, Folkestone, and even down to Dymchurch with its caravan sites.

In the summer of 1958 - I was eleven in the July - I was taken on holiday to Folkestone, staying in a sea-front boarding house, un-named in my memory though I recall it as coming complete with meals taken in the front sitting-room. I passed the first week with my mother and the second with my father - they took turns because there was a pram and toy shop in Dartford to be kept open; today’s version of the premises opens for much longer hours as a kebab.

On his own, my father was free to be more adventurous and came up with a scheme which would have horrified my mother: we were Going to France, which would be an entirely new experience for both of us. He had discovered that on offer from Folkestone were Day Trips to Boulogne, the voyage to be effected aboard the MV Royal Daffodil built in 1938, knocked about a bit on Channel crossings during the war, and now returned to its original purpose of providing outings for English holidaymakers. The boat has long since gone to meet its maker but, of course, it Googles.

Also of course, neither of us had passports. That did not matter: you did not need one. Your day trip ticket came with a one-day disposable “passport” which was not even a proper identity card since it did not bear a photograph; you simply filled in the flimsy bit of card which came with your ticket. This scheme had been introduced in 1955 in the interests - modest as they may now seem - of the East Kent and Nord pas de Calais transregional economy, though transregional economy was not a term then in use.

My father sent his wife the obligatory postcard: black and white, view over the beach and out to sea, not quite a panorama. He records that we are outside a café, that I am eating a huge Ham Roll (long) with coffee - presumably not the Camp coffee which we had at home - and that he has a pocket full of Francs which will pay for the meal billed at an astonishing 570 of them. The stamp on the postcard claimed from his pocket another eighteen.

I had Francs in my pocket too and spent them on a toy car which was different to those we had in the shop back home: it had plastic windows and doors which opened, very advanced features I can assure you. I was wearing a raincoat, rain being a permanent possibility on English seaside holidays, and disembarked at Folkestone, hand in pocket, clasping tight the car, not declaring it to the officers of Her Majesty’s Customs and Excise, sternly present to greet us. I was excited to be carrying contraband. But the booze cruise and tobacco cruise had yet to be invented and I have no recollection of my father carrying anything or other passengers struggling with overloaded bags. A Day Trip to France was a bit of an adventure, that’s all, and did not require even a word of the language.

We had been to France and I had discovered that, if you lived in Kent, you had a Near Abroad where they do things differently. It had been the Near Abroad for generations of English people and - belatedly it’s true - became even nearer with the advent of the Hovercraft and, much more importantly, the Channel Tunnel. But for an eleven year old boy from a modest background, a 1958 Day Trip to Boulogne provided the introduction to a wider world.

For a less pastoral account of childhood, see my memoir I Have Done This in Secret (2018) available in illustrated hardback from Amazon or at a discount from Blackwell's:

This headline from Pink News of 21 July 2021 puzzles me. Is the paper worried that readers won't end up on message unless supplied with the brutally and the heinous? Well, that was a concern they had in the old Soviet Union where readers had to be guided, rather clumsily, to the right response. And it was indeed true, you could not entirely rely on Soviet citizens to be on message, especially as the message did change fairly frequently. But I doubt that is really a problem for Pink News. Very few people are in favour of women being beaten by thugs (though they may have  no specific issue about young women); nor are they sympathetic to those who shout homophobic abuse, even if it's because their objection is a general one about shouting abuse rather than specific to homophobic abuse.  So I wonder what is the function of the brutally and the heinous? Perhaps they are just the nervous tics of an insecure intern? Or maybe the tics take their inspiration from television's Canned Laughter, still in use after all these years just in case you don't find American comedy all that funny.

Soviet-style control anxiety also shows itself in British celebrity gossip magazines which never, but never, print a photograph of Prince George; they only ever print an adorablephotograph (it’s one word, really). All royal babies are by definition adorable though that does not prevent the fact being spelt out. But, perhaps unfortunately, it does not serve to distinguish babies from dogs which - at least when owned by celebrities - are also adorable.

But what then is the function of adorable? I suppose it conveys a sense of the writer as someone who is permanently elated and effusive, rather like a party host who reckons that tonight is a wonderful occasion and everyone looks wonderful and isn’t it wonderful that you were able to come. The cleverness of Eric Clapton’s Wonderful Tonight is that it manages to reclaim a trite (over-used and unthinkingly-used) expression and make it meaningful again. But I don’t expect any celebrity magazine anytime soon to pull off the same trick with adorable. The word is totally fucked.

Adding quote marks doesn't really solve the problem; it's still a control-anxiety introduction to the story. Compare and contrast with another murder reported in today's Independent:

That's a news headline; and it does its work without suggesting  that this crime is newsworthy because the woman was young or 'beautiful'.
Posted by Trevor Pateman at 12:36 1 comment:

Labels: adjectives and politics, Pink News headline, use of adjectives in headline prose, vacuity of the word adorable

The following letter was published in The Financial Times on 18 June 2021, uncut from the version I sent them:

Statues which reproduce the bodies of dead individuals in metal or stone are a bad idea, full stop. This ghastly genre has never produced anything of artistic merit or aesthetic value, which is a main reason why - to be honest - only dogs and pigeons take an interest. Neither the “wokes” nor the academics who feel under threat from government policy, as they appear in “The Battle over Britain’s history”, (FT Weekend, June 12), challenge the genre; they seem to think that introducing more “diversity” into this bizarre world of effigies and mummies would solve the problem. It won’t, not least because heroes are never saints and reputations wear out faster than stone or metal. So: No More Statues! Our public spaces are cluttered with too many of the damned things already and the more that can be got rid of the better. And just to avoid a mis-reading of my argument: Collective memorials, like the Cenotaph, are entirely different in character which is why they are more readily appreciated both as prompts to remembrance and as works of art.
Posted by Trevor Pateman at 01:41 No comments: