This is a short extract from my book The Best I Can Do (2016), available from Amazon and Blackwell

….. The UK has a pre-modern political system - a Ruritanian monarchy with the usual trappings of odd local rights and privileges (ownership of swans and such like); an unelected and completely corrupt second chamber; a first chamber designed to remind its Members of 19th century public schools. Those members have their own unbreakable habits - in the UK, the House of Commons, despite modest changes, remains submerged under fatuous rituals designed to create a backlog of real work and thus to stop as much change as possible. It is made tolerable to Members of Parliament only by the availability of large amounts of subsidised alcohol, recently revealed as the secret ingredient in the famous rowdiness of the House of Commons.

But even where politicians are open to change, they have to contend with the electorate's resistance. Voters are people who stand there, fold their arms and tell you that they always have done and always will do it THIS way. Urged to change, they will stamp their feet and cry, Shan't! Can't! Won't! As a result, for example, the United Kingdom has no coherent system of weights and measures which everyone uses. For a number of years, the European Union tried to get us to Go Metric. But teachers had no intention of going metric (they didn't understand these foreign ideas) and market traders saw the chance to become Metric Martyrs, and like the pound sterling, wasn't it part of our Tradition and Heritage to have fourteen pounds to the stone and , er, eight stones to the hundredweight (which is not one hundred but one hundred and twelve pounds ) and, your turn, how many hundredweights is it to the ton unless it’s a short ton ….and so eventually the European Union gave up in the face of irredeemable stupidity. We were granted yet another opt-out.

As a result, the UK remains pre-modern, with an incoherent jumble of systems in use. Just visit any supermarket. Here you can find pints for some liquids, litres for others. Grams and kilos on one shelf, ounces and pounds on another. In Cornwall, maybe they still sell potatoes by the gallon. Weigh yourself on the bathroom scales, and some of us will use pounds and stones and some kilos. Medications are normally measured in milligrams and grams, millilitres and centilitres and not everyone understands what that all means so there are occasional disastrous results. Go to a fabric shop and you may find meters or you may find yards. Buy petrol and it's in litres, but distance measurement is in miles not kilometres. And, to rub it in, road signs show fractions of miles rather than decimal points of miles - as you approach the Channel Tunnel, you are counted down from two-thirds of a mile to one-third of a mile, a final flag-waving Work-That-Out-If -You-Can optout from new-fangled and, above all, foreign systems.

Two hundred years or more ago, as countries entered the  modern era, so they unified, simplified and extended the reach of systems of weights and measures. Local and highly particular traditions disappeared as did local currencies. The decimal system and the metric system are the expression of this move to the modern era, and their near-universal adoption is one of the enduring achievements of the French Revolution. It was a political achievement but the actual work was done by mathematicians and scientists of the first rank – Condorcet, Laplace, Lavoisier. They tried to work with British and American colleagues – Thomas Jefferson notable among them – but both those countries turned up their noses at what the French were proposing. It took Britain until 1971 to decimalise its currency and 1984 until the anomaly of a ½ penny coin was removed.

But we still haven’t made it into the modern era. Children learn how to use bits of different systems and none of them very well. They have no idea of how powerful a tool a unified system can be. They simply become good at bodging which is fine for a nation of bodgers. It’s obtuse to expect children to be good at maths when their culture constantly tells them to muddle through with anything to do with numbers.

The moral is this: dysfunctional and, more generally, sub-optimal states of institutions and practices can persist indefinitely. They don't necessarily get eliminated any more than do pandas (who are terribly ill-adapted to their environment and generally miserable in consequence). All that happens is that people are generally miserable as they see their societies and economies grumbling and stumbling along, their politicians still aspiring to nothing more than an Opt Out from the modern world.

But people won’t do anything about it. They made their vows long ago.

Posted by Trevor Pateman at 12:52 No comments:

The newspapers tell me that Harry and Meghan want to have Lilibet baptised into the Church of England, ideally in the private chapel of Windsor Castle; Godparents as yet unnamed.

The Church of England, despite its status as a state church and its enormous property empire, is very much down on its luck, and has to trim with the winds - fortunately, it has a lot of previous experience. So the words it now uses  for the Christening Trade aren’t quite those it used back when I was given no choice in 1947. Here are the instructions handed out at the time to my godparents and which would also have been those in place for Prince Charles in 1948: 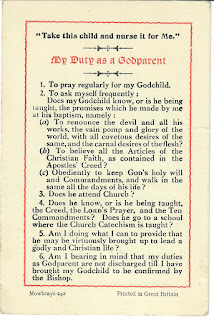 Click to Magnify
It's all different now and I have cut and pasted from the C of E's website the latest version, rather more Laura Ashley and chilled white wine than the 1947 version -  notice the nice generic "themselves", unfortunately attached to a singular "child".
https://www.churchofengland.org/life-events/christenings/guide-godparents/godparents-promises

In the christening service, you will make some big promises to support your godchild throughout their life. You could talk to your own vicar about what these promises mean, or join with your godchild’s parents when they explore what a christening means. If you’re wondering what these promises might look like in practice, or how you can begin, explore our links for some simple ideas.

These are the first things you’ll be asked in the christening service:-

To the questions above, the parents and godparents answer: “With the help of God we will”.

You will then be asked some questions which you answer on behalf of a child who is too young to answer for themselves:

Alongside your godchild’s parents, you will

That whatsoever king may reign, Still I'll be the Vicar of Bray, sir.

Posted by Trevor Pateman at 09:08 No comments: