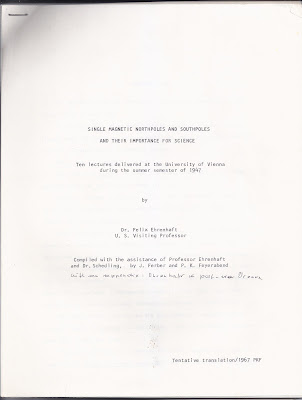 This is a specialist bit of Blogging, originally published on 6 February 2012. It has had lots of visitors so I re-publish it in unchanged form to keep it available for specialists.

At some point when I was a graduate student in London (1968 - 70), Paul Feyerabend came to lecture, maybe at LSE maybe at UCL. Imre Lakatos was lecturing in London at the same time and on at least one occasion, Feyerabend and Lakatos argued together at the blackboard, each armed with a piece of chalk, and in front of a large audience. Both were remarkable lecturers and experts in showmanship.

I have just begun to clear out my papers from that period and doing so, came across a large envelope mailed to me by Feyerabend from Berkeley (where he was a Professor) and postmarked 1971. Inside, there is a Mimeo "Single Magnetic Northpoles and Southpoles and their Importance for Science. Ten lectures delivered at the University of Vienna during the summer semester of 1947 by Dr Felix Ehrenhaft ... with an appendix: Ehrenhaft in post-war Vienna". The Mimeo is described as a "tentative translation / 1967 PKF [Paul K Feyerabend]"

I browsed through the Mimeo. The seven page Appendix II, "Ehrenhaft in post-war Vienna" is written by Feyerabend and gives many clues both to the origins of his later preoccupations as a philosopher of science (science and charlatanism, for example) and to that teaching style which I remember from London. He writes for example of Ehrenhaft:

"His method of teaching was unusual also. It was quite possible, in physics, in mathematics, in astronomy to interrupt the lecturer and to ask for the clarification of a doubtful point (the situation was very different in philosophy and in the humanities where many lecturers rejoiced in giving sermons and where interruption was almost an act of sacrilege). But Ehrenhaft challenged us to criticize him and criticized us for just listening to what he had to say. I can still remember him exploding at one point and shouting at us: "Are you dumb? Are you stupid? Or do you really agree with everything I say?" The question was quite justified for there were large chunks to swallow. Relativity and quantum theory were rejected at once ..." [emphases in the original]

Later, discussing Ehrenhaft's effect on his students in Vienna, Feyerabend asks
"Were we corrupted by him?" and later concludes, " every physics department should at least have some Ehrenhaft among its members"

In this very brief selection of quotations, I think a lot is revealed about the origins of Feyerabend's teaching style, his theoretical contribution to the philosophy of science and some of the difficulties of his professional life.
Posted by Trevor Pateman at 01:17