Girl or Young Woman With a Rose: A Nineteenth Century Painting from Finland 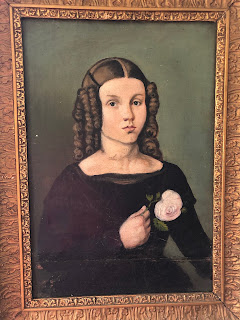 I bought the painting recently, bidding online in a Finnish auction on the basis of how it looked on screen. Now it hangs to the side of the desk where I am typing this. When shipping costs were added, it still cost me under two hundred euros. Those who viewed it in the actual sale room would have seen that it is damaged - the line which runs horizontally across the painting starting from the girl’s elbow marks a repair.

On the back, a very recent label reads “Luultavasti Aino Aalto” - “Probably Aino Aalto”. That proves to be unhelpful. The most famous “Aino Aalto” was a Finnish architect and designer, born 1894, died 1949. Google not only knows all about her work and illustrates it profusely; it also reckons there is no other Aino Aalto worth knowing about. All I get from Google is the new knowledge that Aino is a first name for a female.

The label is ambiguous. It most likely assigns a probable painter but could assign a name to the sitter. From the style of the painting, the fairly crude wooden stretcher, the style of the gilt frame, the dress and hair of the sitter - well, I think this painting dates from before the advent of portrait photography, from the first half of the nineteenth century.

I guess the age of the sitter at between thirteen and nineteen. She’s not displaying a ring but then it’s only her right hand that you can see. The rose is probably a conventional symbol - the bloom of youth, romance - but one should remember that portrait painters (and subsequently photographers) got sitters to hold things simply to stop them fidgeting with their hands. The painter has solved the problem of the other hand by simply chopping it off.

Aino is a Finnish name. There were women painters in nineteenth century Finland, so there is no obstacle to the painter being the Aino and a label on a painting for auction is more likely to attempt to name the painter than the sitter.

In the nineteenth century, someone who was Swedish-speaking was more likely to have been able to afford a portrait in oils. That I infer from my general knowledge, not from Google, though that probabilistic knowledge certainly does not exclude that the sitter was Finnish-speaking.  Likewise, from general knowledge and from the sitter’s hair, dress and facial features, I infer that this is not a girl from the Russian governing population - the Grand Duchy of Finland passed from Swedish to Russian control in 1809. Her religion will be Protestant.

To my eye, the portrait is not in any way cute. Though she has been made to hold a rose, the girl in the portrait looks seriously at the painter, with eyes which are unwavering. If she is nearer to thirteen than nineteen, she may just be uncertain about herself. Nearer to nineteen, then she is a determined young woman.

I can think of no way of finding her name, her date of birth, details of her life, the date of her death. It’s possible that no one anywhere now knows those details, or how to retrieve them. It’s also possible that she figures in some family genealogy, but that the link between the person in the genealogy and the person in the portrait has been lost. After all, this nice portrait ended up in a public auction.

I do think it’s a portrait, not a genre painting for which some temporarily anonymous model has been paid to sit. The idea of the “genre” painting is very convenient for art museums; it saves them from a great deal of homework, and in this case would result in the title, Girl  With A Rose or Young Woman With A Rose, depending on how you resolve her age.

And without a name for her, that generic title cannot be improved.

A revised version of this essay appears in my book  Between Remembering and Forgetting (degree zero 2020; hardback only £15) and the painting is reproduced on the cover.
Posted by Trevor Pateman at 11:43