Veryard: From Hawkchurch via Castle Cary to Tottenham

In Victorian England, everyone was on the move, from rural to urban areas, from country to town. The land could no longer offer employment to all the numerous children of agricultural labourers and, even when and where it could, pay was low and conditions hard. After the repeal of the Corn Laws, agricultural prices collapsed. Meanwhile, commerce and industry thrived. So an explanation for the great migration of the time seems straightforward. But each individual had their own reasons for leaving, for when they left, and for where they went to. Where they went to was often enough dictated by knowing someone who had already made the move and who could provide initial help in a strange place, perhaps even helping with accommodation or finding employment.

My great grandfather Thomas John Veryard moved to London from the small town of Castle Cary in Somerset where he was born in 1854. He moved away after marrying Susan Ridout in 1873 She was born locally in Alford in the same 1854 year as Thomas and lived until 1938 even though she gave birth to a dozen children. He lived until 1932. They have many direct descendants all over the internet.

There were Veryards who stayed put and the surname is still to be found in Castle Cary. Had Thomas stayed, he would not have become one of my great grandfathers. Why did he leave? Well, he had gone to school and probably did a bit better than his peers; he had enough talent to become a typesetter and in later life was self-employed in that skilled and much-in-demand trade. The censuses record him variously as a printer-compositor and letterpress printer , latterly at 79 The Crescent, Tottenham in north London - he can be found in trade directories. But he could have typeset in Castle Cary; there would always have been things which needed printing in a busy small town. Yes, busy small town but small enough for your history to be known.

Thomas was the only living child of a woman who never married, and he kept his mother’s name as his surname. His mother Eliza Veryard, born in 1825, had two children out of wedlock, not in itself unusual in Victorian England. The first was Thomas Morton/Moreton Veryard born in 1849 died in 1852, father unknown but perhaps coded into the child’s middle name. The surname Morton / Moreton is still found in the area notably in nearby Shepton Mallet. On his death certificate, his mother is described as a factory woman. But the child died and left no other mark in history than baptism and burial records. On his baptismal certificate the child’s surname is given as Verriott, as if some disguise is being attempted, but on his death certificate it is Veryard. The slippage is important because Eliza had been born in Hawkchurch, Devon where the Veryard name emerged suddenly around 1731, seemingly the work of  a Verriott family who decided to change or allowed their name to migrate into Veryard which, as it happened, was a more prestigious variant.

There were Devon Veryards in the past who had gone to Oxford before becoming vicars or doctors; one of the medical doctors studied in Holland at the universities of Leiden and Utrecht, travelled extensively for fifteen years, and wrote up his travels in an enormous book published in 1701 and still being printed on demand at Amazon. There were so many Veryards (with spelling variants) in 17th and 18th century Devon and Dorset that it has so far proved impossible for me to conclude that Dr Ellis Veryard ( 1657 - 1714 ) is an ancestor who would falsify my lifetime belief that I was the first ever member of my family to go to university: 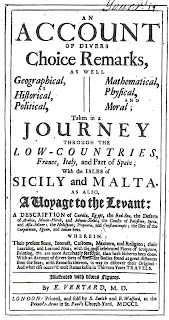 To return to Thomas John Veryard,  Eliza's  second illegitimate child, his middle name matching the first name of the man who is pointed to as the father in the internet sources I have consulted: John Paul Donne born in 1829 and dying in the year of Thomas’s birth. So Thomas never knew his father who was buried alongside other family members in nearby Shepton Mallet.

Now it’s possible that Eliza hoped to marry John and was thwarted by his death. She may have turned into a melancholy Miss Havisham; certainly, when Thomas moved to London with his young family he took his mother with him and she remained in his household until she died in Tottenham in 1905, aged eighty, and still unmarried. Thomas gave his mother’s name to  one of his children and she became my grandmother Eliza Kate Veryard, born in London in 1886 and alive when I was a child. She must have had some contact with the Castle Cary Veryards: when my parents married in 1938 they honeymooned in Somerset and spent time in Castle Cary.

But there is more to the story of the first Eliza and John Donne and it suggests that there could not have been a marriage and maybe that the situation was distinctly uncomfortable.

Eliza had come to Castle Cary with her parents from Hawkchurch where by the time of her birth in 1825 the Veryards were well-established and more or less all employed in the dominant local industries based around making ropes and twines, using flax and hemp, and all much in demand in busy local ports like Bridport which was then a significant harbour. On her birth certificate the occupation of her father Thomas Veryard is given as Twine Spinner. Her mother is as usual without occupation, and was Ann Chalk before her marriage, which took place in Dilton Marsh, Wiltshire in 1822. Eliza was a second child when she was born in 1825.

In 1828, when she was three years old, Eliza’s father was convicted in Exeter crown court of a theft regarded as serious enough to merit a whipping and three months in prison (the Exeter House of Correction) with three weeks of that in solitary confinement. Then in 1831, he was convicted of assaulting a constable and sentenced to six months hard labour. Both convictions would have affected his subsequent employability. He was probably rescued from the worst consequences by the death of his father, another Thomas Veryard and another twine spinner born in 1764, who moved to the Bristol area and married a Hannah Bailey who pre-deceased him. In Bristol, he worked for his brother Robert whose advertisement for his business was caught in an 1825 engraving, though later in 1835 Robert went bankrupt: 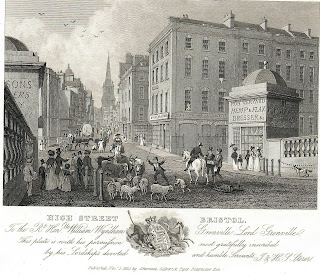 Before then, his brother the widower Thomas died intestate in 1829. As eldest son born in 1798 Thomas was tasked - on his release from prison and after the law’s usual delays - with winding up his father’s affairs. That indicates some property or money, and Thomas’s final share may have enabled him to move away from Hawkchurch and his damaged reputation and take his family off to Castle Cary.

But having extricated himself from Hawkchurch, Thomas died suddenly at the age of forty five in 1843 when Eliza was eighteen.This left her mother Ann with several children including two younger ones born after the move to Castle Cary: James in 1834 and Solomon in 1842. In the 1851 census, twenty six year old Eliza is at home with her widowed mother and two year old Thomas Morton, still alive. She is working as a shoe thread puller which may have been outwork done at home. By 1861 Eliza  is in lodgings at 87 Mill Lane Castle Cary with second son Thomas John, now six, both of them living just three doors away from her own mother; the son is already a scholar which means simply that he goes to school and so is on track to become literate. In the census, 1861 Eliza is a shoe thread baller.

All of this history points to one conclusion: Eliza Veryard would not have been a suitable wife for John Donne, for he was a son of Castle Cary’s principal employer Thomas Salisbury Donne (1798-1862) who owned the Higher Flax Mills which worked not only with flax but linen, tow, twine - and shoe thread which Eliza Veryard was pulling for him in 1851 and balling in 1861. She was the low-paid outworker of a wealthy and powerful local employer. When she registered the birth of Thomas John in 1854, she signed with a cross; she was illiterate.

If John Donne was indeed Thomas John Veryard’s father, then he is one of my sixteen great great grandparents and connects me to the Donne family. But apart from his parentage, I know nothing about him and since he died aged 25 there may have been little to know. It’s a pity no one asked Eliza Veryard or passed on the tale.

About Ellen Ridout, Thomas John’s wife, I also know nothing, except for part of her line of descent backwards through rural Somerset families: Ridouts, Foots, Lentorns/Linthornes. When her husband decided to move to London, she went with him, and they took her mother in law with them. That’s the main thing.
*

It is because Thomas Veryard at some point moved his family to 79 The Crescent Tottenham (the Crescent no longer exists) that his daughter Eliza Kate met Albert William Pateman, born in 1885, who was living at 143 Tottenham High Road and working as a chandler’s assistant when he married her in January 1910 at the Edmonton Register Office  - the first Register Office wedding I have come across in my family history. Kate’s oldest sister Ellen was witness, though she had married and was now E J Whatmore. Albert’s older sister Florence was the second witness. Both bride and groom had both parents alive and living locally, so the marriage may have been disapproved of. The bride does not appear to have been pregnant though there could have been a miscarriage before her first child William John was born at the beginning of 1911 and her second, my father, Albert George, eighteen months later.